Because I Love Sand

….and the rest of the Middle East too!

The Sinai Peninsula of Egypt, situated between the Mediterranean Sea to the north, and the Red Sea to the south, has some of the world’s best diving.  The Sinai is a fascinating place to visit for other reasons too.  It is the home to Mount Sinai, where Moses received the ten commandments, and beheld the burning bush, and to Saint Catherine’s Monastery.

It is also stunningly beautiful, it’s landscape craggy and reddish, and covered in sand.  I guess that’s what happens when two continents come crashing together.  The Sinai has traditionally been inhabited by Bedouins, a nomadic people who live in portable tents in the deserts of the Arabian peninsula.  They are renowned for their generous hospitality, which I can personally attest to.

I found myself slightly stranded on the Sinai last November while I was attempting to bus it (solo) from Cairo to Israel.  Due to several unforeseen challenges, I landed in Sharm al-Sheikh, the southern tip of the Sinai, at about 9 pm, only about halfway to Israel.  There I met a Spanish dive instructor, an Egyptian diver, and a Bedouin man who was offering to drive the three of us about 60 miles north to Dahab.  The Spanish woman promised me she had some Bedouin friends who owned a hostel on the beach, and she would take me there.  OK, I said, slightly annoyed that it would take me 2 full days to go 260 miles (ended up being 450 with previously mentioned unforeseen detours).  When I got to Dahab, the Bedouins were waiting for me with mint tea, conversation, cushions on the beach, and a HUGE plate of freshly caught fish.  When I woke up the next morning, I could not believe how beautiful the view was

I left the next morning to continue my trek to Israel, severely regretting not having realized how amazing the Sinai was.  I really want to go back, it is basically at the top of my list.  I would love to dive in Ras Mohammed National Park, climb Mount Sinai, and see St. Catherine’s.  I would also just like to spend more time with the Bedouins, a group of people I find fascinating and warm and strong.  They certainly taught me a lesson in serendipity and kindness when I could not have been more annoyed:  slow down, enjoy the ride, and eat some fish on the beach with some nice, new people. 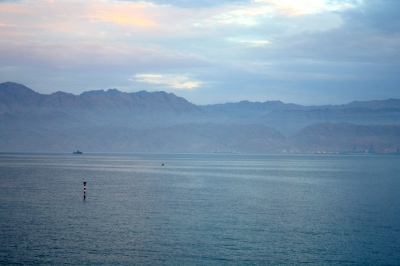 The Israeli side of the Sinai, Eilat

And with this post, I am giving myself homework.  Two more posts: one on diving in Egypt, and one on Bedouins.  Due: this week.  Stay tuned.

Mint, an herb long cultivated across the Middle East and North Africa, is renowned for its cooling and healing properties.  Its modern name came from an ancient Greek myth.  Persephone, the jealous wife of Pluto, transformed the object of her husband’s lust, the lovely young nymph, Minthe into a plant so all could trample her.  Unable to reverse the spell, Pluto instead gave Minthe a pleasant scent that intensified when she was tread on.  The name Minthe eventually evolved into Mint.  The versatile plant was used by the Ancient Egyptians, Greeks, and Romans in aromatic baths, as a salve for sports injuries, and as an appetite stimulant.  In Rome, Pliny the Elder advised his students to wear wreaths of mint to sharpen their minds, and senators wore mint sprigs in the hope of enhancing their oratory skills and suppressing their tempers.  It has long been known to serve as a digestive aid, as an antiemetic, and as a cough suppressant.  It is refreshing when served cold and soothing when served warm.

Historically, mint is a symbol of hospitality.  The Greeks and Romans would rub mint on banquet tables to greet their guests,  and today, Moroccans are quick to offer a glass of mint tea as a gesture of friendship.

Both mint lemonade and mint tea are widely drunk throughout the Middle East and North Africa.  They are both easy to make, healthy (as long as you are much more conservative with the sugar than they are in the Middle East), and de-licious!